What are GCF and LCM? how to find it using different methods

The purpose of this article is to explain how to calculate the Greatest Common Factor (GCF) and Least Common Multiple (LCM) of integers.

There are many different situations where these skills can be useful.

What are GCF and LCM?

The first term indicates the largest number that can be evenly divided by two whole numbers.

In mathematics, the LCM is a small integer that can be divided by the given numbers and emerges as a common multiple.

The largest integer shared by all the numbers is GCF.

How to find GCF?

GCFs are fairly easy to find out.

By using GFC, fractions are simplified and calculation is clarified.

For example, we have the numbers 5 and 25 and we have to find the GCF among them, we can make their factors.

Let’s take the numbers 5 and 25 as examples. If we have to find the GCF among them, we can do it by obtaining factors between them.

As you can see 1 and 5 are the common factors, so we can multiply them and get the result.

In this method, we find the prime factors between two numbers and then again find the common factors.

How to calculate GCF using an Online Calculator?

The GCF or HCF finder uses a variety of methods to determine the greatest common factor (highest) among the input numbers.

After entering values, select either of the method listed above.

Then just click “Calculate” to get the result you want.

Using 35 and 95 as inputs and selecting the “Prime Factorization” method, we obtained the following results.

The GCD is used in numerous number theory applications, such as modular arithmetic and encryption algorithms.

Additionally, it can simplify fractions for simpler applications, like adding fractions to a number.

As a result, GCDs are among the most fundamental concepts in number theory, and many algorithms have been developed to efficiently compute them.

How to find LCM with GCF And LCM Calculator

LCM stands for the smallest common multiple that can be divided by the set of given numbers. Each number must be a multiple of the other ones.

LCM can be discovered in a variety of ways. The three most widely used methods are:

Finding prime factors for each number is part of the prime factorization method. The LCM is then calculated by pairing the prime numbers.

Our example involves finding the LCM between two numbers 15 and 35.

As the 5 is the common number between these values, so we can find the least common multiple by the following process: 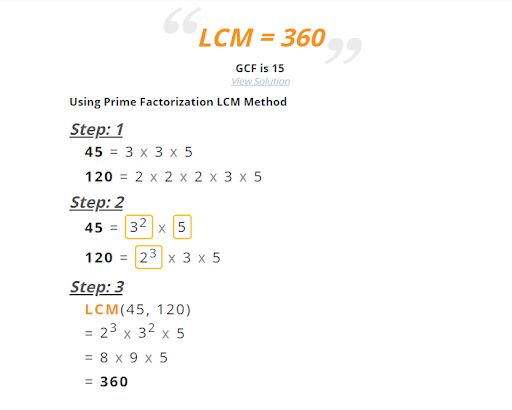 How to calculate LCM using an Online Calculator?

An LCM calculator calculates the least common number among two or more numbers.

It is quite easy to calculate large LCM numbers using the LCM calculator. LCM and least common denominator are terms used interchangeably.

Following is a step-by-step instruction for using the least common factor calculator:

With the online HCF and LCM calculator, you can find the LCM quickly and efficiently. 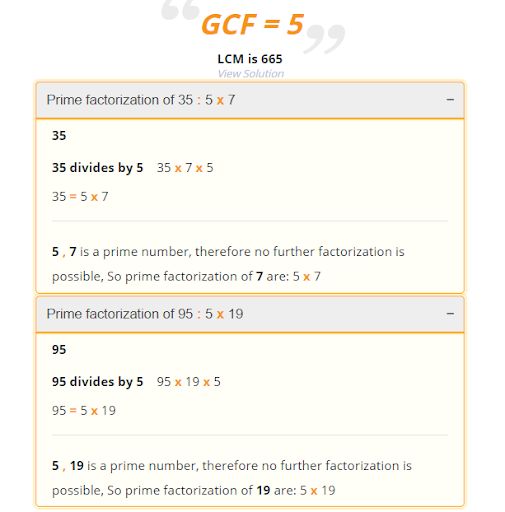 Here are some real-life applications of LCM calculation:

But the LCM always arises whenever you are trying to work out a fraction’s common denominator.

It is rather straightforward to discover the greatest common factor and the least common multiple, regardless of which technique is used in the process.

GCFs and LCMs are often useful when working with factors and multiples. These skills can help simplify fractions and other calculations.

These, however, extend what we know about multiplication and division, so that we acquire a deeper understanding of what it means to be a factor or multiple, and that we can more readily comprehend real-life’s situations.

Pick some numbers to practice, and you are good to go. In the exercises, we mostly used two numbers at a time, but the same can be done with any group.